What do you do if you want more fruit but don't have room for another tree? Here are 10 suggestions.

Trees are wonderful anchors to any permaculture garden. But they take up a lot of space and it doesn't take long for a large backyard to reach its capacity. Fortunately, there are many fruits out there that do not come from trees, including some of the more unusual fruits.

This list of trees to grow will help you build up a diversity of fruits in your permaculture garden even if space is too limited to fit another tree.

Raspberries and blackberries are members of the genus Rubus. So is their cousin, the dewberry. They are native to North America, and in Calfornia we have the native Pacific Blackberry. So what a great choice that can be to grow for fruit! Blackberries are known to be hard to kill, they will stick around generation after generation with complete neglect. However, if you want them to fruit you usually have to irrigate.

Kiwifruit, or just Kiwi, are native to Central and Eastern China. I went most of my life assuming they grew on trees, but it turns out they grow on a vine!

If you enjoy kiwi, this can be a wonderful vine to add to your yard. They love a temperate climate. The common store variety is the fuzzy kiwi, about the size of an egg. But there is also the kiwiberry, which is closer to the size of grapes and taste pretty much the same. These have been showing up in stores on occasion as well.

You might think this list was only for non-tree fruits, and you would be right. So why are bananas on this list? In fact, bananas do not grow on trees. Banana "trees" are, botanically speaking, the largest herb plant, since they do not form a woody structure.

Bananas can make a wonderful addition to the garden since they are fast growing and they can form great screens. Bananas carry out their lifecycle in a single year. After they fruit, they die. Before that happens, they send out shoots for the next crop.

Melons are in the curcurbit family. I think of them as the fruit version of squash. Like squash, they grow on a vine. They produce similar looking flowers before slowly growing a big round fruit.

Melons originated in Africa, Southwest Asia, Iran and India. They do very well in heat. The types of melons are mainly: honeydew, cantaloupe and watermelon, each having many cultivars to choose from for a little variety.

The vitis genus is a vining plant that can grow quite massive, or it can be cut back annually and kept to a reasonalbe size. They do great on trellises and arbors.

You can find lots of cultivars, name a wine, syrah, pinot, champagne, and find a grape. Somehow it comes as a surprise how similar the grape tastes to the wine it makes. For a common snacking grape, you might look for Thompson Seedless Grapes.

In California, we have a wild variety, Vitis californica. The grapes are a little sour and take some getting used to, but the plant grows vigorously and supports the local wildlife.

Pineapples is a tropical plant originating in the Brazil and Paraguay area. In the US, pineapple is grown in Hawaii, but production has dropped to almost nothing in the 21st century. Most pineapples now come from the Phillipines.

Typically a pineapple plant produces one fruit. However, it will send off slips and suckers. Some people are fond of growing a new pineapple from the top of a cut pineapple.

The Ribes family of gooseberries and currants can make wonderful edible snacks. If you are outside of California and thinking of growing currants, you should look up the law in your state. Some states have had to restrict the plant because it can be a carrier for white pine bluster rust which is devistating to pine tree forests.

Currants are little tart berries. Local to me, we have Golden Currents. These a shrubs that grow vigoriously in our dry climate. They are known to be hard to kill and are easily propogated. If you want some, get a cutting and stick it in the ground, it is likely to take.

There is also the Sierra Gooseberry, which I don't have any experience with. It grows throughout the state, mainly in the Sierras. But also the San Gabriel mountains and the foothills.

Strawberries are another great one to grow for fruit. They love sun and heat. They are also great spreaders, so if you buy only a few plants and give them a chance, over a few years you can have a whole field. They spread readily by sending out runners.

California has a couple of native strawberries, the woodland strawberry and the beach strawberry. Their fruit are very small, but packed with flavor.

Blueberries grow on a bush, either a large bush called a "highbush" or a short bush called a "lowbush." Blueberries are native to North America and California does have a couple of varieties. Wild blueberrries require a significant amount of cold days in the winter in order to produce fruit. So unless you live in a cold mountain area, if you are growing blueberries for fruit you will want a horticultural variety that can fruit with fewer hours of freezing temperatures.

Huckleberries are closely related to blueberries. They are the state fruit of Idaho. They grow natively in Central California and throughout the Northwest. They tend to struggle, rarely fruiting, when grown outside of their natural range.

Every papaya you buy from the store comes with a bonus, a seed packet of a thousand seeds. Papaya are easily grown from these seeds. So if you find one you like, grow it!

Papaya are a tropical plant, so they need a moist environment. Also, keep in mind, they do not transplant well. They don't like their roots disturbed once they have a developed taproot.

And the final thing to keep in mind is, Papaya a dioecious. That means you will need to have both a male plant and a female plant for them to reproduce. The typical recommendation is to have 5 papaya plants to ensure you get the male necessary to pollinate the females.

Some names you might find for ground cherries: Inca berry, Cape gooseberry, husk cherries, poha berries and golden berries. Don't confuse them with the other kind of gooseberry that is in the currant family (Ribes).

One obvious characteristic of ground cherries is the papery husk that develops around the fruit. It is just like the husk that forms around tomatillos. Both, like tomatoes and eggplants, are in the nightshade (Solanaceae) family.

They are great to grow from seed. They grow into a compact shrub. They like moist soil. I read somewhere they are good companions to mint which I thought was strange because mint is so aggressive, but I had an extra one growing in a small pot and added it to the mint and it is doing very well now. Both mint and ground cherries like moist soil and tolerate clay well.

There are a few varieties of ground cherries that are native to California, but if you are growing for food you will probably want to choose from a selection of nursery cultivars. They have a range of flavor profiles, from sweet to tart. I occasionally buy the "golden cherries" from Trader Joe's which are very tart, but addictive!

Two fruits you might consider growing from the cactus family are Prickly Pear and Dragonfruit. I'm not sure about elsewhere, but these are both very popular to grow in Southern California.

There are many different species of Prickly Pear (Opuntia), commonly known by their Spanish name as Nopales. You might also hear these referred to as Cactus Apple. Opuntia grow natively through much of Mexico and there are also a few species native to Southern California. They grow natively not just in the desert, but also the warm, dry chaparral communities and the coast as well. The cactus grows in segments called appropriately "paddles." These paddles are cooked and used as a vegetable in many Mexican dishes. They are similar in sweetness and texture to a squash.

Opuntia form a white flower with long, slender petals common in the cactus family. These flowers then give way to small, oval fruits about the size and shape of a large kiwi. I have eaten these by splitting them open and squeezing out the pulp to eat directly from the fruit. They are not overly sweet, and remind me of red bean paste used in some asian deserts in both flavor and texture.

You do have to be careful of the tiny spines that grow on the exterior of the fruit. I got some in my gloves once and it was quite an annoyance for weeks after whenenver I would put those gloves on I would be pulling tiny spines out of my fingers for the rest of the day.

But dragonfruits do not fit the stereotype of a cactus. They come from the tropics. Their native range is from Mexicao down to South America. and like water (think tropical monsoons) and shade. That's right, shade. Dragonfruit are the vines of the cactus family, in nature they attach themselves to trees and crawl up them for support. The tree protects the cactus from sunlight.

Dragonfruit do well in our warm, dry climate. Just make sure to supplement with water and provide some shade. They also like a little compost. 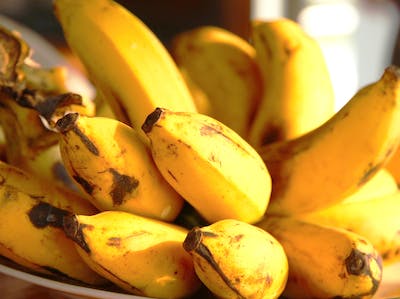 How to Grow Bananas