Looking for a way to dip your toes into hydroponics with a simple, no-frills setup?

My garage doesn't have electricity and I don't have room for a big pump setup in my house, but I wanted to try hydroponics and see what I could do with it.

I thought there must be a way to do this that doesn't require electricity or a pump. But every method out there requires some sort of pump for aeration. Except this one method that I was able to find.

Hydroponics is the growing of plants immersed in an water-nutrient solution, usually with some soil-less growing medium like gravel, sand, coir or polymer clay balls.

Growing food hydroponically has some advantages and also controversies. The biggest advantage of hydroponics is that it delivers nutrient rich water directly to the plant, so efficiently that plant growth is greatly accelerated.

Hydroponics is also more compact that growing outdoors in soil, which is one reason the home-hobby is still dominated by the cannibus growing crowd.

Hydroponics is also being utilized by agriculture industy. I recently visited a u-pick strawberry farm with my family that grew their strawberries outdoors, in 4 layers of hydroponics tubes, using coir as their growing medium. This New York Times article describes a massive hydroponics operation being used to grow produce in Kentucky. Because of the human controls hydroponics allows for, all seasons of vegetables are able to be grown all year.

That same article also points out a controversy with hydroponics, which is nutrition. I ran into a nutrition question when I was preparing my experiment here.

Hydroponics relies on chemical nutrition that is mixed into the water in order to feed the plants. This is an input, so hydroponics done this way can't fit into permaculture unless we find a way to do this ourselves.

Also, many people in permaculture are purists about building soil, a years-long process of adding nutrients to soil through compost, mulch and crop rotation while protecting against erosion. Real soil is going to have a broader range of micronutrients than these chemical concoctions. And these nutrients end up in the final plant. Therefore it is reasonable to expect that soil raised foods will be more nutrient-rich than hydroponic raised foods.

This illustration shows what happens to the plant over a short time period as the nutrients are consumed.

Supplies: What You Need

Step 1: Trace a Circle on the Bucket Lid

Step 2: Cut out the Circle

Using an x-acto knife, cut the circle that you just wrote on the lid. Once you have done that, test the basket to see if it will easily fit in the lid. Use your x-acto knife to shave out the sides of the hole to make it larger until the basket easily fits.

The circle should be as close to a circle as possible, but it doesn't have to be perfect.

Add your soil-less medium to your hydroponic basket and add your seedling. This is just like potting any other plant.

Leave at least an inch of space from the top of the bucket to the top of the water. When you put the basket it, some water will be offset, also there is no reason to fill it all the way to the top.

Step 5: Put the Lid on the Bucket and Add the Basket

The level of the water should cover at least half of your hydroponic basket.

And that's it! You should keep the plant somewhere it can get plenty of sunlight. I keep mine on my porch where it gets some sun protection for much of the day, but still plenty of light overall. 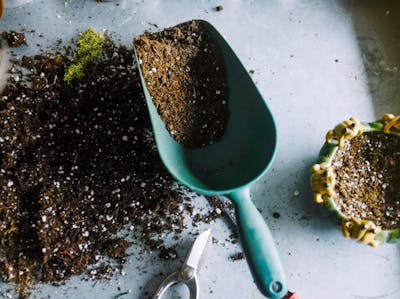 Make Your Own Potting Mix